By Gayle Tzemach Lemmon
(CNN)Awarding the Nobel Peace Prize to Dr. Denis Mukwege and Nadia Murad says one thing: survivor stories matter. Mukwege, a gynecologist who set up a hospital in the Democratic Republic of Congo, has treated thousands of rape survivors who suffered traumatic injuries at the hands of warring militias, while Murad is an Iraqi Yazidi human rights activist who survived enslavement at the hands of Islamic State militants
These two indefatigable campaigners on a quest for justice have never stopped reminding the world that sexual violence is still an ongoing issue.
Now, as these brave voices who were willing to speak out about unspeakable horror accept their Nobel Peace Prizes on Monday, it is up to the world to do more than nod its head before moving on. It is time to bring perpetrators to justice and to make security for women and girls more than just a slogan trotted out around International Women’s Day and at UN conferences.
«Within these past four years, not a single IS member has been brought before the international courts,» Murad said in Norway on Sunday. «The lack of justice and the lack of accountability of criminals will lead to the emergence of other terrorist organizations that are more lethal than the current one.»
Silence and indifference are no longer options. Instead, we must make lifting up survivors a rule and evading responsibility the exception. The Nobel Peace Prize must mark the start, not the end, of a widespread push for recognizing the unspeakable cruelty so many sexual violence survivors have faced. 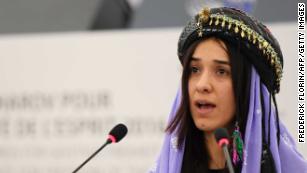 Nadia Murad, from ISIS sex slave to global human rights campaigner
«Persecution of minorities must end. Sexual violence against women must never be tolerated,» Murad said in a statement following the Peace Prize announcement. «We must remain committed to rebuilding communities ravaged by genocide. … We must work together with determination — so that genocidal campaigns will not only fail, but lead to accountability for the perpetrators.» She added, «Survivors deserve justice. And a safe and secure pathway home.»
Murad survived a hell that even those who hear and read about it can’t fathom. She endured enslavement, torture and rape at the hands of the Islamic State — along with the loss of her mother, her six brothers, her community and her friends. Following her escape, she refused to be silent, but instead shared her story with a world that had failed to protect her community. Yazidis continue to be victimized and thousands remain missing. While Murad is now settled outside Iraq and engaged to a fellow activist, she is at the helm of her own organization and remains a tireless advocate who is working to make «‘never again’ a reality.»
And it is for this same quest to end inhumanity and depravity that Mukwege has risked his life. He has treated women who have survived sexual violence of a barbarity which words don’t capture — and he has done so despite threats and assassination attempts. 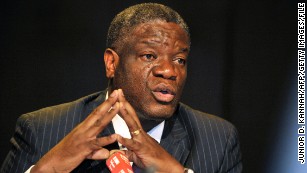 Denis Mukwege: The man who mends women
«This Nobel Prize reflects this recognition of suffering and the need for just reparations for female victims of rape and sexual violence in countries across the world and on all continents,» Mukwege said in a statement. «I dedicate this Nobel Prize to women of all countries in the world, harmed by conflict and facing violence every day. … To the survivors from all over the world, I would like to tell you that through this prize, the world is listening to you and refuses to remain indifferent. The world refuses to stand idly in the face of your suffering.»
Now comes the question of what, exactly — beyond issuing prestigious awards and gathering in fancy ballrooms — the world is prepared to do for Murad, Mukwenge and all those for whom they speak. And there is one answer: justice.
«As part of the campaign to defeat the Islamic State, the Security Council and Iraq should support accountability for the terror group’s use of rape and other forms of sexual violence, as convicting and imprisoning its top leaders for these crimes will take them off the battlefield and undermine the revenues gained from sex trafficking,» wrote Fordham Law Professor Catherine Powell last year.
And as the Norwegian Nobel Committee noted, «This year marks a decade since the UN Security Council adopted Resolution 1820 (2008), which determined that the use of sexual violence as a weapon of war and armed conflict constitutes both a war crime and a threat to international peace and security. This is also set out in the Rome Statute of 1998, which governs the work of the International Criminal Court. … A more peaceful world can only be achieved if women and their fundamental rights and security are recognised and protected in war.»
Indeed, forcing these perpetrators of sexual violence to face legal consequences for their crimes is a critical next step. And one that just might begin this week in Oslo.
Share this