When the armed men arrived at her northern Myanmar village, Anuwara, a 33-year-old Rohingya woman, first wondered how she could protect her six children.

When villagers delivered the body of her husband, a teacher who was shot dead as he returned from school, she thought of how her family could escape. 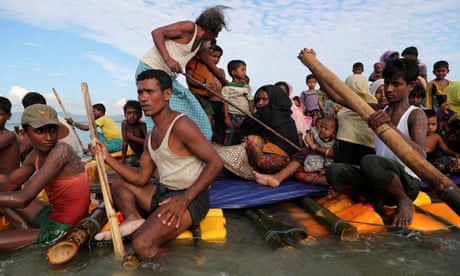 As they fled to Bangladesh, first on foot, then by boat, she was consumed by the urge to survive. “The armed men shot a nine-year-old girl in front of us,” she says. “People tried to cross the river too quickly because gunmen were behind them. Some sank in the water and died.”

It was only months later, when Anuwara and her children were safe in Bangladesh, sheltering inside a plastic and bamboo tent, receiving regular food and water, that she says her mind turned to the next question: now what?

On 25 August last year, Rohingya militants attacked a series of Burmese police outposts with knives and homemade bombs, killing 12 people, according to the Myanmar government. In response, the Burmese army launched “clearance operations” against what they called terrorists in Rohingya villages, driving the majority of the ethnic group into neighbouring Bangladesh.

One year later, more than 900,000 Rohingya people, most of them children, are living in five refugees camps wedged into the Cox’s Bazar district of southern Bangladesh. One of them, Kutupalong, is the largest refugee camp in the world, with at least 700,000 residents. An unprecedented humanitarian operation is feeding the Rohingya, providing them with shelter and keeping disease and the elements at bay.

“There was nothing a year ago, and now we have the fourth-largest city in Bangladesh,” says Sumbul Rizvi, the chief of the Inter Sector Coordination Group, which coordinates the dozens of agencies operating in the camp.

But there is no answer yet to Anuwara’s question. A year after their latest – and largest – mass exodus from Myanmar, nobody knows what will become of the Rohingya. “Quite a few issues make it still unclear,” says Mohammed Abdul Kalam Azad, the head of the refugee relief and repatriation commission, the Bangladesh government body overseeing the response.

History warns against a return

Bangladesh and Myanmar both agree the refugees should be returned, and so do Rohingya leaders. “Myanmar is our original country, our land, and we wish to return as quickly as possible,” says Mohib Ullah, the chairman of the Arakan RohingyaSociety for Peace and Human Rights.

But he also recalls the events of 1991, when a quarter of a million Rohingyafled Myanmar to Cox’s Bazar in Bangladesh, accompanied by stories of rape, forced labour and murder by Burmese soldiers. Most agreed to return a year later – only to find themselves facing the same persecution from Myanmar’s authorities.

Dhaka has said it will not force any Rohingya to return involuntarily, and Ullah is determined history will not be repeated. “1992 was a lesson for us,” he says. “Back then, we agreed with Bangladesh and the UNHCR. We obeyed their messages and their rules, and our people returned. And we faced a genocide. Everything got worse.”

The walls of his headquarters are covered in a list of demands, without which he says the Rohingya will never return. “We must be fully guaranteed citizenship, our safety and our original land,” Ullah says.

The UN said this week that, months after it signed an agreement with Myanmar to support the refugees’ return, it was still being denied effective access to Rakhine state, the region from which the majority of Rohingya were driven out.

Azad recently returned from Rakhine. He says progress is slow, but that Myanmar authorities claim to have set aside 42 villages to rebuild for the Rohingya. Asked if he thinks they are sincere, Azad shrugs. “It’s the million-dollar question,” he says. “We still want to trust the Myanmar side will stick their promises.”

A year on, the scale of the army-led operations that forced the Rohingya from Bangladesh is still being unearthed. At least 6,000 Rohingya children crossed the border without their parents. In July, the humanitarian agency Save the Children set out to understand how many unaccompanied minors could be reunited with a parent. “We made an assumption that the majority of kids could be,” says Daphnee Cook, a spokeswoman for the agency.

The results of their investigation of a sample of 139 children horrified the aid workers. More than half were determined to be orphans – their parents murdered in their villages or en route to Bangladesh.

Holding Myanmar accountable will be a long process, says Wayne Jordash, a human rights lawyer petitioning the international criminal court to charge the state with genocide and other crimes against humanity.

Prosecutors at The Hague are still trying to clear the first hurdle: persuading the court it has jurisdiction in the case, given that Myanmar has never agreed to be subject to its decisions. Bangladesh has, and lawyers are trying to persuade a pre-trial chamber at the court that one potential crime against humanity – deportation – was not complete until the refugees crossed the border into Bangladeshi territory, and into the court’s jurisdiction.

Even if the judges agree, it will be at least five years until any kind of trial. “Preliminary examinations are measured in years, and so are full investigations,” Jordash says.

Bangladesh maintains the Cox’s Bazar settlements are temporary, but quietly acknowledges it may have to provide for the Rohingya for years. It is considering slightly relaxing restrictions on education and better-quality housing for the refugees.

“We are considering what we call mid-term shelters, which may last for maybe more than a year or two,” says Azad. “And we are considering education for the young people who can really gain skills and the ability to integrate with the main society when they return to Rakhine.”

As time passes, international interest in the crisis is likely to dwindle, and with it, funding from overseas. Already the latest phase of humanitarian efforts is only about 34% paid for. The figure provokes outrage in camp administrators.

“Do we realise the impact of underfunding?” Rizvi asks. “We are running out of food from September onwards. We have no money to feed people. It doesn’t make me sad any more, it makes me angry. The international community needs to show responsibility for what they all recognise as a horrific situation.”

In southern Bangladesh, more than a million Rohingya people prepare for a long wait. Humanitarian agencies are already warning of a “lost generation” of children, growing up without school or employment in the camps.

In Hakimpara, a camp of 55,000 people, Mohammad Ilyas gestures at one of his children. “They will become weak day by day in this camp,” he says. “I can’t give them an education here, or work. They can’t do anything.”

But he sees no alternative. “We cannot go back,” Ilyas, 35, says. “When I sleep at night, I will feel fear. Will the military come to capture me? Set fire to my house? Always we will be afraid.”

“I am thinking about the future a lot, but I can’t do anything by thinking,” Anuwara says in her tent nearby. She can only depend on God and Rohingya leaders, she says.

She has enough immediate concerns to occupy her. “He always asks about his father,” she says of the three-year-old boy in her lap. “I tell him, your father is at the market. Your sister is with him now, bringing home some beef. And he is just silent.”