Ask anyone in Italy about who might be sitting at the head of government in Palazzo Chigi following national elections on 4 March and the answer is a collective shrug of the shoulder.

Silvio Berlusconi, the former prime minister and master of reinvention, has portrayed the centre-right coalition he leads as a safe pair of hands against the insurgency of the populist Five Star Movement, which has the overwhelming support of young voters but a dismal track record in municipal governments.

Whether either side can cobble together a resounding majority on 4 March, or whether Italy will hobble from one election to another – as some predict – seems anyone’s guess.

There is only one likelihood that most pundits do agree upon : that the Italian centre-left, led by former prime minister Matteo Renzi, seems poised to be heading for a humiliating defeat, not unlike its ideological counterparts in Germany and Spain. 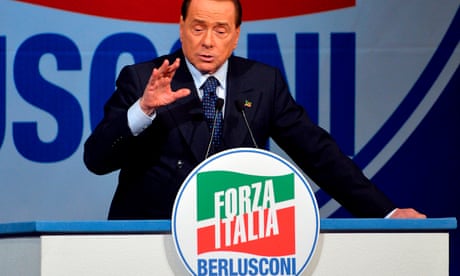 Things should be looking better for Renzi, the former Florence mayor who, in his heyday in 2014, made sweeping promises that he would herald in a new, modern Italy, revamp the economy and reform politics-as-usual. Renzi was forced to resign in late 2016 after he badly lost an ill-advised constitutional referendum.

Since then, he has remained at the helm of the Democratic party, as his former foreign minister, Paolo Gentiloni, took over the reins of leading the government. Now, despite significant improvements in the economy under the PD’s (Democratic party) leadership, Renzi’s centre-left coalition is lagging in the polls, with about 22% of voter support.

“The crisis on the left is not something that began today,” says Giovanni Orsina, a historian and political professor at LUISS University in Rome. Not unlike the British prime minister, Theresa May, Orsina says Renzi lost the “political patrimony” he had a few years ago, and since then has been sidelined by one misstep after another, including his party’s push for a change in electoral laws that only served to help his political opponents on the right.

Like tensions between Hillary Clinton and Bernie Sanders, or Blairites and Corbynites, Italy’s left has been splintered by fights between centrists and forces further to the left, who dismiss Renzi’s policies – which they perceive as being too business and bank-friendly – as well as his ambitious, sometimes arrogant-seeming character.

“The centre-left is not seen as an alternative to the disgruntled voters out there. It embraced globalisation and bailed out banks when needed, and has not been able to differentiate itself from centre-right,” says Wolfango Piccoli, the co-president of Teneo Intelligence, a research firm in London.

“When you cannot offer an alternative, voters look to the centre-right and the new parties, the Five Star Movement. What does the PD have to offer? Apart from taking care of pensioners and civil servants, it has no ability to reach out to the youth,” he says.

Even as the centre-left risks fading into oblivion – Orisina says he has heard that internal PD polls are worse than ones in the public domain – it is Berlusconi who has reemerged as a political force.

It is still unclear whether the 81-year-old, who was known to enjoy sex partieswith young women when he last held high office, would be allowed to serve as prime minister. Berlusconi was banned from serving for six years following a conviction on tax fraud, but is challenging the legality of that law in European courts.

As the head of Forza Italia, Berlusconi is nevertheless leading a coalition, alongside two parties on the far-right, the Northern League and Brothers of Italy, which could plausibly win an absolute majority.

Berlusconi’s pitch is not dissimilar from that which he used when he first entered politics in the 1990s, when he portrayed himself as the answer to the threat of communism, Piccoli says.

“Now it is him against the populist threat of the Five Star Movement. He is saying he is the experienced, responsible statesman, that is his pitch,” Piccoli says; a man who can sit around a table with Angela Merkel and Emmanuel Macron.

Berlusconi has demonstrated how he managed to stay in power for over a decade, leading the centre-right coalition to an important victory in regional elections in Sicily.

There is speculation about who might serve as prime minister of the centre-right coalition, including options that would be palatable to the Northern League’s Matteo Salvini, whose support could pull the coalition over the top. They include Luca Zaia, the Northern League president of Veneto, and Antonio Tajani, the president of the European parliament and a member of Berlusconi’s Forza Italia party.

Surveys released this week by Tecne and IPR showed the centre-right coalition was gaining momentum, with Tecne showing it has about 39.2% of the vote, while IPR shows the Berlusconi coalition with 38%.

If Berlusconi fails to win an outright majority, there is still a chance he could forge an agreement with the PD to form a coalition, but it appears to be an unlikely outcome for now.

While the movement, which is led by former comedian Beppe Grillo, now ranks as the most popular party among voters, it lags about 10 percentage points behind the centre-right coalition with voters, according to the Tecne and IPR surveys.